So then, faith commeth by hearing,

and hearing by the word of God.

Within the Orange Order there is a true Biblical ecumenical spirit and Protestants from many denominations worship together at lodge meetings and church services. In the same spirit this page, known as the 'FAITH PAGE' is to promote the great fundamentals of the Christian & Protestant Faith without indulging into denominational differences. We sincerely hope that you are blessed by what you read. 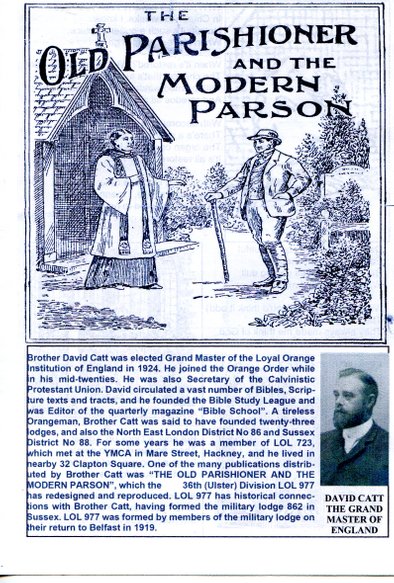 Brother David Catt was elected Grand Master of the Loyal Orange Institution of England in 1924. He joined the Orange Order while in his mid-twenties. He was also Secretary of the Calvinistic Protestant Union. David circulated a vast number of Bibles, Scripture texts and tracts, and he founded the Bible Study League and was Editor of the quarterly magazine “Bible School”. A tireless Orangeman, Brother Catt was said to have founded twenty-three lodges, and also the North East London District No 86 and Sussex District No 88. For some years he was a member of LOL 723, which met at the YMCA in Mare Street, Hackney, and he lived in nearby 32 Clapton Square. One of the many publications distributed by Brother Catt was “THE OLD PARISHIONER AND THE MODERN PARSON”, which the  36th (Ulster) Division LOL 977 has redesigned and reproduced. LOL 977 has historical connections with Brother Catt, having formed the military lodge 862 in Sussex. LOL 977 was formed by members of the military lodge on their return to Belfast in 1919.

Copies of this four page publication is available free  by sending an A5 stamped addressed envelope to Billy Dickson, 177 Tates Avenue, Belfast BT12 6NA. A donation to our memorial fund for the purchase of new Colours (flags) would be appreciated. Cheques to be made payable - 36th (Ulster) Division LOL 977.  Email:  billy.dickson@ntlworld.com

Sermonaudio is a fantastic site and especially useful to those, who for valid reasons can't attend church. Please let us know if you find it a help; we would love to hear from you. 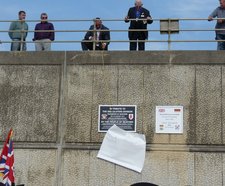